My Juggernog Design Is No Longer on Redbubble 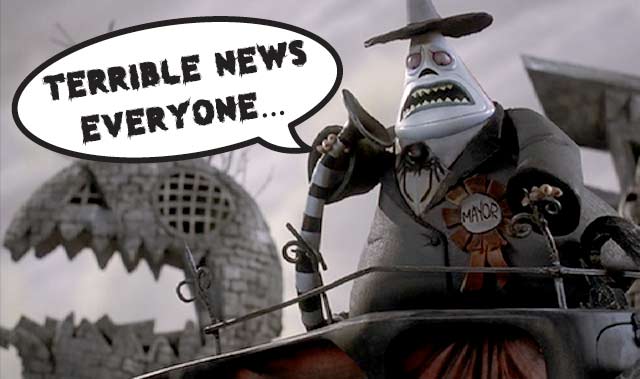 Posted by Shaun Hudson at 9:45 AM No comments:

So as you may have figured out by now... I love the Fallout games. For some reason while watching this season of The Walking Dead this idea popped into my head. “What kind of S.P.E.C.I.A.L. would each of the characters have?” Then it moved to, “If they had special perks, what would they be?” And that is how I ended up with this design. I had planned on doing an entire series. Marshall Law being the first as Rick Grimes. Sensational Samurai as Michonne, Skilled Bowman as Daryl, Pizza Boy Sprint as Glenn and Farmer’s Daughter as Maggie. However, I think now these just help add another little easter egg into the overall design. Also, it says Level 5 to represent that we are in Season 5 of The Walking Dead now.

So to come up with how this should look I started looking at what Vault Boy perk icons already existed. I found a few that I could use as a baseline. So the main pose of Rick is from one called Gunslinger, and I borrowed the style of the hat from another. I tried to make it look like Rick, while retaining as much of the Vault Boy as possible. I gave him squinty eyes that sort of match the expression Rick has a lot of times. The text is supposed to represent how Rick’s character is a natural leader, so naturally he would have a little more charisma than others. I also threw in Gun and Melee skills because of his talent with those weapons. I toyed around with a different color scheme as well. The default color of Fallout: New Vegas is amber, and I thought that color matched pretty well with the color and tone of The Walking Dead. However, when I showed it to people, I got a better response from the classic green from the previous Fallout games.

Many thanks to my friends who had to see 20 or so iterations of this design and help me make those oh so crucial final tweaks. Also, a big thanks to Shirt.Woot.com for picking up another of my designs! This makes number 3!

Head over to Shirt.Woot.com to get yours today!
Posted by Shaun Hudson at 2:00 AM No comments:


I am a huge fan of the show Metalocalypse and the music that came from it from Dethklok (Brendan Small). For a while I had seen a bunch of other T-Shirt designs with the Starbucks logo on the daily shirt sights. So this was on the top of my mind when one day my ipod randomly pulled up non other than, the Duncan Hills Coffe Jingle. As seen here... 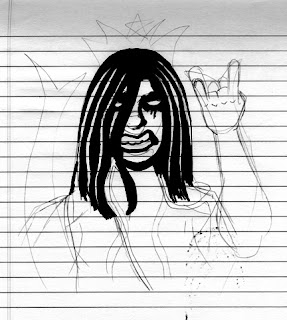 I frantically searched the internet to make sure this amazing idea had not been done already. And to my surprise it had not! I started working on it immediately. I grabbed a notepad and started sketching it out. I started with a loose sketch of the original Starbucks logo, then started drawing Nathan's face over top. I thought to match the mermaid tails (or whatever they are) I would put both hands up with the devil horns sign. But when I took this to digital it looked dumb, so I went with one of his classic mic holding hands. Now for the devil horns I ended up with, I took a picture of my hand to get the angle just right. Then I swapped the starts for pentagrams and BOOM a brutal design is born.

So finally this design is being printed on one of the daily shirt sites. This will be available at ShirtPunch on Thursday May 30th 2013 for only $10! If they sell enough they may even do the sequel designs! See below!

Of course all of these are available now at www.locoroboco.com!


This is my third official print on one of the daily tee sites. This design came to me around Halloween. One of my favorite movies was on TV, Shaun of the Dead, so of course I watched some of it. But I noticed that Comedy Central removed one of my favorite parts, where Shaun and Ed sit and plan how to save everyone, they go through several plans, all of which include killing his infected father-in law named Phil and rescuing his mother. Comedy Central only plays the last version of the plan. See the clip here.

So as that was on the top of my mind, Kill Bill Vol.1 came on and I came up with this idea. Kill Phil done in the style of the Kill Bill movie posters. Now I know what you are thinking... the Kill Bill posters are yellow. Once I got into the design I felt thinks were getting lost on the yellow background, so I found a version of Kill Bill on black with yellow type setting, so I went with that.

So I  merged the Shaun of the Dead stance with the Bride stance of the Kill Bill poster. I turned the cricket bat down to match the sword angle from KB and removed the flowers. I also decided to go with a more animated style to avoid licensing issues. I also added a swoosh of blood in the background to mimic KB but to also give people a reason to say "you got a bit of red ya."
Posted by Shaun Hudson at 1:50 PM No comments:

Fallopoly will be printing on RIPT Apparel Friday Oct. 26! This marks my second published design on a Daily T-shirt site. Again, it is a simple design and based on Fallout, much like my Shirt.Woot design, Condition Fleshwound. I had the idea after seeing a different Chance card spoof somewhere on the internet.

So I've taken the Monopoly Chance card, "Go directly to Jail," and swapped it with characters from the popular series Fallout. So my first thought of course is the Deathclaw. Anyone who has played this game and accidentally run into one (especially at a low level) know what I'm talking about... DEATH. So I changed the cop to the Deathclaw and the Monopoly man to the beloved Vault Boy. Luckily the Vault Boy and Monopoly man share a very similar art style, so it was an easy transition. I did however have a more difficult time with the Deathclaw. The head went through many revisions before I got it just right. I originally wanted to put it on an orange card, that way it would work any almost any color shirt. But RIPT has a deep orange color shirt, so I thought it would look best with one screen printed directly on the shirt.

Posted by Shaun Hudson at 2:42 PM No comments:


So my latest designs are based on the Call of Duty: Nazi Zombie mini-game. So basically your goal in the game is to survive as long as you can against waives and waives of zombies. As they added new levels to this mini-game, they added new features, like a mystery box that could give you a super awesome weapon, like a ray gun or a dud, like a sniper rifle. They also added Perk-A-Cola's, they are vending machines that you spend  your hard earned zombie killin' points on which give you perks similar to those from the multiplayer side of Call of Duty. Anyway, that is where all of this is coming from...

The concept.
I wanted to do a design that looked like an ad. The original CoD: Zombies was in the CoD: World at War which was a WW2 game. So the time period was set to the late 40's. I happen to love that time period so the designs where a lot of fun for me. I started with Jugger-Nog, a perk that gives you double health. I decided to start looking for Coca-Cola reference art, the vending machine in-game looked like an old school Coke machine. I found lots of material to work from, including this hand ripping through paper holding an ice cold Coke. I said to my self, PERFECT! That was the hand I needed to really sell this idea. Now I just had to "zombify" it. So after drawing the initial hand, I realized I had to figure out the wrist and arm. So I starting thinking back to my high school anatomy class... yeah that didn't get retained, so I found some good images of the forearm bones and went from there. I really wanted the bones to look like they are in the right place, so I drew the bones first, then the wrist over top. I left some detail of the bone on the wrist, but most of it got covered up later by the banner.


Once I got the hand and bottle just right it was time to thing about the sign to use. I found this classic Coke sign. It was also PERFECT! It was ornate, had the price in the corners and just overall looked the part. So I drew this up and simplified it a bit. The cool part is I only drew the top left corner and copy and pasted it in illustrator so it would look nice and symmetrical. Then I dirtied the whole thing up in photoshop to give it that vintage look. I was pumped at this point. So I challenged myself to do a design for each of the 7 remaining Perk-A-Colas. 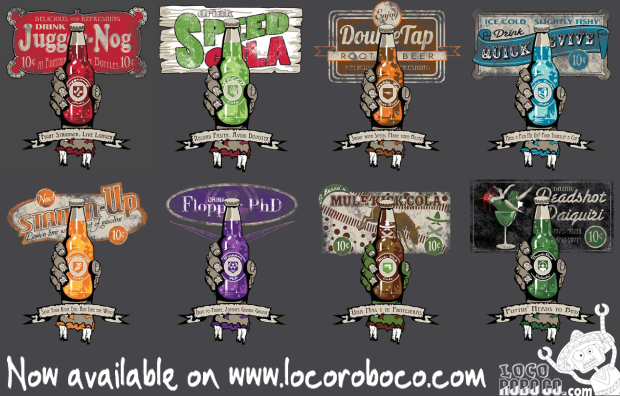 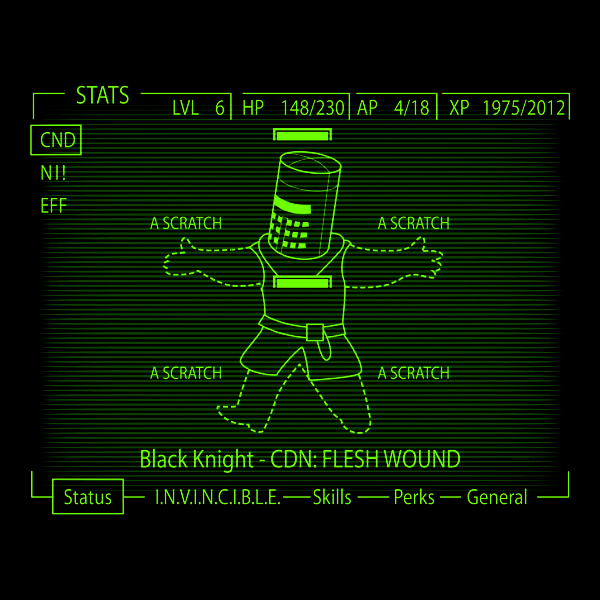 This is my first design to be picked  up by a daily shirt site. Ironically it is the one I spent the least amount of time on. I was shooting around ideas with my buddies one day while having lunch. I had recently started a new character in Fallout: New Vegas and was talking about how terribly I had set up the character and was getting beat up by cazadors. We then started with ideas for Fallout themed shirts. We had seen a lot of Monty Python themed shirts as of late, and then it hit me. I've always thought about the Black Knight when one of my limbs is crippled in Fallout and you keep on fighting, most likely because you found some rare item and don't want to lose it by dying. "Tis but a scratch."

When I pitched the idea, my friends said absolutley! I have to give props to fellow artist and friend, Ben Smith aka The Bensanity. He helped prod my mind to get this idea out.

After I got the sketch out, I got it into illustrator and did my thing. I also found a screen shot of the actual pipboy to mimic the status screen. There are also several easter eggs hidden within the status screen. Normally on a pipboy screen  you will find your S.P.E.C.I.A.L, but to keep away from copyright issues, and to tie it in more with Monty Python and the Holy Grail, I changed it to I.N.V.I.N.V.I.N.C.I.B.L.E. Also changed RADs to NI! and the experience points are actually dates, 1975 when The Holy Grail was released, and 2012 when this shirt was printed.

This shirt will be available for $12 plus free shipping Tuesday July 10 only. After Tuesday, it will be $15 and only for a limited time.

Click here to buy it today!
Posted by Shaun Hudson at 2:31 PM 8 comments: